The Indian market continues to open up to foreign businesses. This presents opportunities for the Dutch space sector, says Akanksha Sharma, senior policy maker at the Dutch Innovation Network. Based in Bangalore, Sharma helps Dutch businesses and institutions gain a foothold on the Indian market. 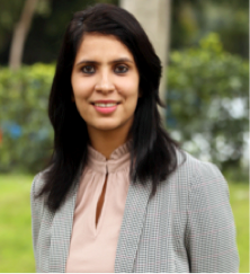 “I have always been intrigued by international collaboration. When I started my career, I helped startups and scale-ups from all over the world gain access to the Indian economy. That brought me into frequent contact with embassies and consulates. I have been working as an innovation officer since 2013 to promote collaboration between the Netherlands and India.”

Being Indian, what aspects of the partnership between these countries do you find most surprising?

“What stood out to me from the beginning is the openness of the Dutch culture. As a small country, the Netherlands has always relied heavily on international trade. Collaboration comes naturally to many Dutch people. I had to get used to the directness of the Dutch. In India, people are not as quick to tell you 'No.’ They tend to beat around the bush a lot more. The Dutch simply tell you what they want or do not want. That makes the collaboration very clear, effective and efficient.”

Where do you believe the biggest added value of the partnership between the Netherlands and India lies?

“It lies in the water, agriculture and health sectors, or ‘wah’ for short. That word means ‘super’ or ‘amazing’ in Hindi. In our communication, we add an exclamation point: WAH! The exclamation point represents key enabling technologies such as big data and artificial intelligence.”

“Space is certainly important as well. India has had its own space programme since the seventies. There are actually pictures of rocket and satellite components being transported by ox cart. Those are incredible images. In the decades since, science and technology have always been important and budgets have grown over time. Bangalore has become a hub for electronics and IT. It is also home to ISRO, the Indian Space Research Organisation.”

How large is the Indian space sector?

“A study from 2021 shows that the Indian space sector is worth $1.9 billion per year. It also shows that the sector has more than tripled in size over the last twelve years.”

What opportunities are there for Dutch parties on the Indian space market?

“The collaboration between the Netherlands and India dates back to 2014, when the student satellite Delfi C3 was launched with an ISRO rocket. Since then, there has been a multi-faceted bilateral programme. One of its key aspects involves the use of satellite applications to combat air pollution. That is a major problem in this country. We are working together with a consortium of Dutch businesses and knowledge institutions to develop a model of that pollution. In the fields of water management and spatial planning, there is also a strong interest in Dutch knowledge and technology.”

Is it hard for Dutch parties to operate in India?

“If you want to enter the Indian market, you have to have a partner organisation in this country. That is why we do a lot of matchmaking. We can show commercial enterprises in the Netherlands where the opportunities lie in our market. A number of Dutch businesses has already gained access to our market, particularly in the domain of small satellites. In the years to come, the number of opportunities available to Dutch businesses will only increase. It is the result of a regulatory change implemented in 2020 that is gradually opening up the Indian market for foreign businesses.”

How have the corona years of 2020 and 2021 affected the collaboration between the Dutch and Indian space sectors?

“The COVID pandemic actually contributed in a small way to getting new projects off the ground. Before the crisis, everything was done with physical meetings. That is both costly and time consuming. Now, we have all grown used to digital conferencing, which has drastically reduced the distance between our countries. In April of 2021, a digital meeting was held between the Dutch and Indian Prime Ministers Rutte and Modi. Space was literally one of the talking points during this meeting, which means it was discussed at the highest political level. It has certainly given a boost to the collaboration between our countries in this field. Immediately after that meeting, we organised a series of workshops together with NSO, e.g. about air pollution.”

How do you expect the partnership between our countries to develop in the future?

“India has a strong need of the space technology and expertise that the Netherlands has developed, particularly in the field of small satellites and technological innovation. This creates opportunities for alumni of e.g. Delft University of Technology, for startups and for major industrial parties and knowledge institutions. I expect our partnership, which is almost a decade old now and which has received a new impulse in the last two years as a result of COVID, to continue to grow in the future.”