Interview: “Satellites have led to great advances in the field of meteorology” 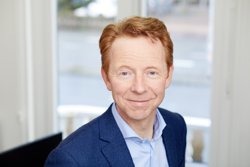 Gerrit Hiemstra, Director/owner Weather Impact and weather presenter at the NOSHis weather forecasts appear on the television screens of millions of households at the end of every NOS news broadcast. Meanwhile, Gerrit Hiemstra is also working on sending weather forecasts to poor farmers in developing countries via text message. “They may not know what satellites are, but they can certainly benefit from them.”

As a meteorologist, do you often use satellite data?

“I do, but usually not directly; I mostly use the data indirectly. The satellite data are fed into the computer models that we use to generate weather forecasts. The data are mostly processed in what we call the “starting situation.” That is an overview of what the weather is currently like all over the planet, based on as many different data sources as possible - including satellite data. We do occasionally use satellite imagery directly, e.g. when we show the images to viewers during the evening news.”

How have space applications affected your field?

“I have been working in the field of meteorology since 1986. Since then, we have made enormous progress. Most of that is the result of two major developments. The first is the available processing power of our computers, which has increased exponentially.

The second is the volume of available data. We now have far more information at our disposal, most of which comes from satellites. Now that we have a better overview of the current weather and faster computers, we can create far more accurate and detailed weather forecasts.”

You contribute to NSO's G4AW programme behind the scenes. What is your role in this programme?

“With Weather Impact, we take part in various consortia that provide weather forecasts to local - often poor - farmers in developing countries. That sounds easier than it is, because their situation is almost entirely unlike ours.”

Why is it so difficult to make weather forecasts there?

“Especially in Africa, it is exceptionally difficult to gather accurate meteorological data.

The necessary infrastructure is practically non-existent, nor is there any money to develop it. That is where satellite data can help. However, there are other obstacles as well. Some farmers in Africa are not familiar with maps. How can you teach those people to work with satellite data?”

Well, how can you?

“We primarily look at the data that are most important to these farmers, such as precipitation and wind. Our complex models, which incorporate satellite data, give us information about those factors. We can then condense all that complex data into a simple text message that is sent to small farmers in Africa. That text message contains information that is important to them.”

Can you give an example?

“Take a sesame farmer in Ethiopia. Sesame is a kind of grass with seeds growing in capsules. It should be sown when rain is coming, so it can start growing immediately. The seeds should be harvested before the wind blows them all away and destroys the harvest. Once or twice a week, we send farmers a text message with the latest rain and wind predictions. That knowledge allows the farmer to increase their odds of a successful harvest.”

“We are talking about people who, unlike us, have never seen a weather forecast before. Anything we can do for these people benefits them. We can make a truly valuable contribution that helps them make optimal use of their land.”

This is an application at a relatively small scale. How can you use satellite information at a larger scale?

“Technology keeps moving ahead. As better instruments are developed, we can gather more and more data. For example, the Dutch satellite instrument Tropomi is incredibly important in the field of meteorology. Even though a weatherman does not necessarily need data about the composition of the atmosphere, this information is invaluable to scientific research. The same goes for research into sea levels and the ice caps using the altimeters on board satellites. Without satellites, it would be almost impossible to conduct any measurements in remote areas such as the poles and the oceans.”

What do you believe is the biggest challenge we will face in the near future?

“During the Climate Adaptation Summit 2021, it was about climate change, which is a growing global problem. Summits like this are generally quite abstract. During a few sessions, I attempted to demonstrate that you can also make the issue very concrete. We can bridge the gap between the abstract global climate problem and people's everyday lives with projects such as G4AW. This programme truly serves as an example for the rest of the world. Now it is time to maintain that momentum. Many such projects end when the money runs out and then all the progress you have made is lost. We have to make sure that the practical aid we can offer continues to be used. That is where our challenge lies.”