High-tech from the Netherlands hitchhikes to space on Norwegian satellite 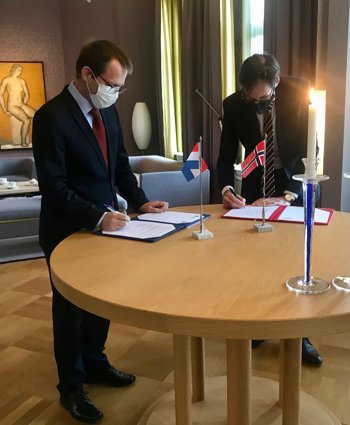 Signing of the agreement in the Netherlands by Harm van de Wetering, Director General of NSO (right), and Bård Ivar Svendsen, the Norwegian ambassador. n will be tested on the Norwegian satellite NorSat-TD, due for launch in 2022. This partnership was stated in an agreement signed this morning by the directors of both space agencies, NSO from the Netherlands and NOSA from Norway. The signing took place in parallel at the embassies of both countries in The Hague and Oslo in the presence of both ambassadors.

The satellite payload named SmallCAT has been developed by the research institute TNO and the Delft based company Hyperion Technologies. This technology makes use of laser beams rather than radio signals to transmit valuable information from space to earth. There is great interest in this new technology because it enables satellites to transmit larger amounts of information 10 times faster and more securely.

“This mission is a great example of international cooperation in space with added value for all involved. This partnership with our Norwegian colleagues enables us to demonstrate promising high-tech for small satellites at an early development stage”, says NSO director Harm van de Wetering.

“The Norsat-TD mission demonstrates the powerful impact of bilateral cooperation in the space domain. Cooperation on capacities which serve national needs, as well as satisfy future commercial ambition, serves as an important complement to Norway´s space activities within ESA and the EU”, comments Christian Hauglie-Hanssen, Director General of the Norwegian Space Agency. 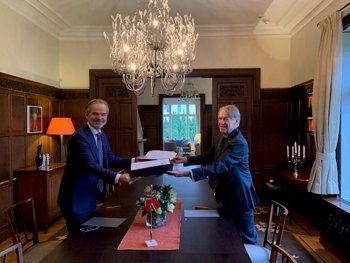 Signing of the agreement in Norway by Christian Hauglie-Hanssen, Director General of NOSA (left), and Tom van Oorschot, ambassador of the Netherlands.

SmallCAT has been developed in the framework of the ARTES program of the European Space Agency, supported by NSO and the Ministry of Defense of the Netherlands. In preparation of the launch, Dutch companies and institutions are working on a ground station for laser communication. This station will be able to send and receive information to/from the satellite via laser communication.

When the SmallCAT technology works as expected in orbit, TNO and Hyperion Technologies will integrate the technology on to a product called CubeCAT, which is a plug and play terminal for laser communication onboard small satellites.

NorSat-TD is NOSA’s next technology demonstration microsatellite. The multi-national, multi-mission satellite, weighing just 30 kg and no bigger than airline carry-on luggage, will fly six demonstration payloads from four nations; Norway, The Netherlands, France and Italy. The satellite is part of a series of Norwegian microsatellites mainly focusing on maritime applications.