The Netherlands Space Office (NSO) recently approved two new projects for funding within the Geodata for Agriculture and Water Programme (G4AW). Both projects aim to improve the food security, income and livelihoods of mainly small-scale farmers. The projects will reach, more than 200,000 farmers in Ghana and Angola who will get access to the new satellite based information services.

“The awarded subsidy from the Dutch government for the two new projects Sat4Business and Mavo Diami amounts to approximately 2.5 million euros each; the remaining 30% of the project costs are borne by the relevant consortia, " reports Joanna Ruiter, who is involved in these projects as NSO adviser. Since its launch in 2015, the G4AW programme has already provided more than 1 million food producers with geo-information services through 25 projects in 15 African and Asian countries. 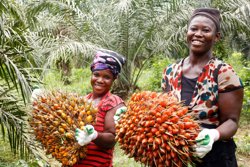 The project in Ghana is called Sat4Business and wants to support more than 140,000 cocoa and palm oil farmers to increase production, income and food safety. The farmers will receive specific information about market prices and the weather per smartphone location. In addition, they receive access to individual cultivation advice and knowledge transfer. At the same time, Sat4Business promotes access to financial services - loans, insurance and pensions - because the business risks for their providers are reduced by the input of current information. Via a FinTech platform, these service providers will have insight into the size and quality of the plots, crops and operations of the individual farmers. This is combined with the facts about climate risks in the various regions and with the current economy on the cocoa and palm oil market. With its innovative approach, 7 organizations work together within the Sat4Business consortium, including 4 Dutch companies. Solidaridad Europe (based in Utrecht, The Netherlands) is responsible for the project management. Project Manager Javier Aguado: "The next step will be to set up the Sat4Business platform and have it tested by farmers and by providers of information and financial products."

The G4AW project in Angola, which is comparable in purpose, is called Mavo Diami ("my land"). The crops will be different, but here too, farmers will improve their business performance through various geodata services. Around 100,000 farmers receive very specific advice on sowing, fertilizer, irrigation and harvesting times, partly based on satellite data. 12 product market combinations will be developed by a consortium of 5 Dutch companies in collaboration with the Angolan Ministry of Agriculture. Specific information services will be provided on a subscription basis; basic information becomes available primarily through freely accessible channels. The Mavo Diami platform will also be opened on a license basis for application development by third parties. Dutch project leader within the collaboration is World Vision International (based in Amersfoort, the Netherlands), which has offices in Angola. It will maintain relationships with national organizations, partners such as geodata providers, investors and users of the services. World Vision will also coordinate the local operational activities. According to Robert Jan Bulten, Lead of Multilateral Grants in Angola a challenge for 2020 is to involve farmers in service development during a trial period to ensure that the service meets their needs.