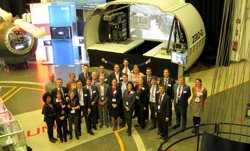 The SBIC incubator has already produced no fewer than 300 success stories, from self‑employed developers of an app that uses satellite imagery to large companies of over 100 employees that focus on innovation in space technology. One could read about these stories, but Roger Kleinenberg from the Dutch embassy in Washington believes it is much better to walk around in the middle of the action and talk to the people involved: ‘I am amazed by what we are capable of in the Netherlands. Of course, NASA in America has a much bigger budget, but in certain niche areas, such as satellite applications for water management and agriculture, the Netherlands can measure itself against the best in the world. I can apply what I learn today to attract new clients in the United States.’

The ladies of Viridian Raven also drew attention with their short presentation. Together with their colleagues, Wendy Mensink and Lisa Broekhuizen have developed an application within SBIC that calculates the risk of a forest being stripped bare by the bark beetle. And there is no lack of ambition: Viridian Raven wants to provide every forester in the northern hemisphere with access to this valuable risk analysis tool, so that they can intervene as soon as a forest is threatened.

Opportunities for the Netherlands

Joost Carpay of NSO outlines the current trends in the space industry: from government-initiated to commercial, from technology-driven to demand-driven, and from ‘space for the sake of space’ to innumerable applications of space technology in far-removed sectors, such as agriculture and water management, but also mobility, security and energy. Carpay: ‘The innovation attachés are our liaisons abroad. They scout out demand and discover where opportunities lie for the Netherlands.’

Frank Helmich of the space research institute SRON referred to a memorandum of understanding that was signed 7½ years ago on a similar day, between his institute and the Japanese space agency JAXA regarding collaboration on the ASTRO-H space mission. SRON built an astronomical instrument for the satellite and became part of the scientific team.

Arnaud de Jong, director of Airbus Defence & Space Netherlands and chairman of the space companies’ association SpaceNed, has calculated that between 90 and 95 percent of Dutch space industry activities are export-related. The sector currently employs over 1,000 professionals and has an annual turnover of 150 million euros. However, strong growth is possible because the space industry, and its applications in particular, is booming business. Filled with new ideas and renewed enthusiasm, the attachés flew back to their home countries, convinced that the Netherlands is indeed a space country.

More about the Innovatieattaché Netwerk.