The Soyuz capsule used by André Kuipers for his space journey between December 2011 and July 2012 was unveiled by the Minister of Economic Affairs Henk Kamp at Space Expo in Noordwijk on Monday. The capsule was brought to the Netherlands thanks to negotiations between NSO and the Russian space agency Roscosmos and space corporation Energia. The Ministry of Economic Affairs and several other sponsors made a financial contribution, due to the historical value that the capsule has for the Dutch space sector. Besides that, André Kuipers and ‘his’ capsule also help enthuse young people over science and technology. 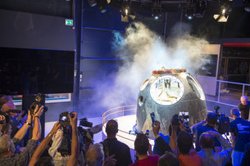 Minister Kamp: ‘Space appeals to the imagination. It is an example of how, with innovation and perseverance, we can push back the boundaries and make our dreams come true. Dutch organisations and knowledge institutes contribute to this, but it requires plenty of engineers, now and in the future.’

André Kuipers became an ambassador for the Technology Pact in 2013. With his special lecture tour, he has come into contact with about 10,000 pupils and teachers in the last two years. ‘If we are to maintain our globally competitive knowledge economy, it is important that we continue to attract young people to technology and associated educational programmes. André Kuipers has an important part to play in this. The arrival of the capsule in Noordwijk means that his space journey will continue to inspire,’ said Minister Kamp.

Dutch innovations and products have contributed to the international space programme for many years. Industrial products, such as solar panels, have been used in various space missions, such as the comet chaser Rosetta and the Mercury mission BepiColombo that is to be launched early next year. The Netherlands also makes abundant use of the data produced by the space industry. This data helps improve scientific understanding of climate, food and water issues. Infrastructure such as satellites is also vital to telecommunication, navigation and observation.

A good example of such an application is Tropomi, a Dutch measuring instrument that will be launched with a Russian launch vehicle early next year. Tropomi will daily measure the air quality at every location in the world and the Royal Netherlands Meteorological Institute (KNMI) will use this data to produce air quality maps. These maps will show air pollution and greenhouse gas hotspots, as well as the sources of the pollution. This will help us comply with the international climate agreements drawn up at the end of last year in Paris. 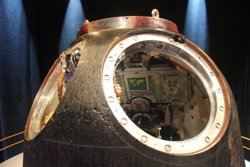 The capsule is currently on display to the general public at Space Expo. During the open day at ESA’s test centre, ESTEC, on Sunday 2 October, tickets to the museum will be available at a special reduced rate of half the normal price. Museumkaart holders may visit the exhibition free of charge.