Satellite measurements of the fluorescence of plants can provide a great deal of valuable information about crop health. This is what Peiqi Yang and Christiaan van der Tol of the University of Twente have shown in recent research, funded by NWO in collaboration with NSO.

Van der Tol usually starts his lectures by shining a blue light on some tapenade. To the surprise of his students, the tomatoes do not emit blue light, but red. Tomatoes and other plants fluoresce: they emit light in a different color (wavelength) than that absorbed. A well-known example of fluorescence is blacklight: UV radiation is absorbed by white clothing, which then emits white visible light. 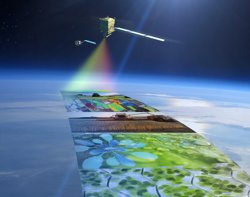 ESA's FLEX mission is due for launch in 2025 (image: ESA) Fluorescence of plants can be observed from space with satellites. But until now, this has not been widely used by biologists and climate researchers. That is not surprising: the fluorescence is many times weaker than the reflected green light from plants and not much was known about it yet. What does the amount of fluorescence say about the health of a crop?

To convert the measurements from the satellites into this kind of useful information, you have to understand very precisely what is happening in a plant.

This is exactly what Van der Tol and Yang have done. They have studied the physical processes that take place in a plant, such as the absorption of carbon, water and light, and calculated how much light is released. With this information, they can convert the amount of fluorescence measured by satellites into detailed information about the health of a crop. 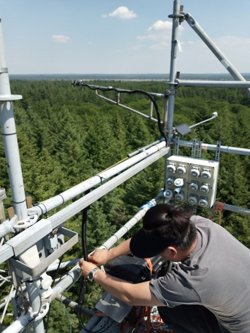 Measurements on the ground To verify these models, Yang took measurements in the U.S. and Germany. The satellite measurements of the amount of photosynthesis matched the ground measurements well beyond expectations. This detailed information is very valuable in research into how plants respond to climate change: during a heat wave, for example, it is now possible to calculate from satellite images how much warm water a crop absorbs.

Satellites differ from one another: they measure slightly different wavelengths and the angle at which they look at the earth is different for each satellite. The model that Van der Tol and Yang have made can be used for all satellites. Van der Tol is now working in collaboration with ESA on a project to use old, stored satellite data to look back 20 years into the response of plants to climate change.

The future also holds great promise: in 2025, ESA will launch FLEX (the FLuorescence EXplorer), the first satellite specifically designed to measure plant fluorescence. With this satellite data we will gain even more insight into how plants respond to climate change: knowledge that is necessary for food security and taking effective climate measures.