'Contact confirmed', 'capture confirmed', 'docking confirmed': these were the liberating words after an afternoon of nail biting for those involved. At 3:29 PM CEST this afternoon, the 20-ton Russian Nauka module floated at 10 centimeters per second against the docking piece on the International Space Station. An important moment for the Dutch space industry, because the European Robotic Arm built in the Netherlands has thus arrived at its destination, and the operations of the ERA arm can begin. 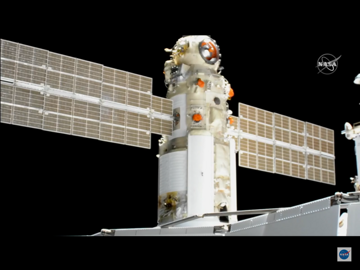 Nauka module docked at the ISS (screenshot from NASA TV)