From 12 to 16 July, the Netherlands and Belgium are organising the International Geoscience and Remote Sensing Symposium. IGARSS is the foremost annual international symposium for the combination of remote sensing (earth observation) and geosciences. Ilse Aben, senior scientist at SRON and endowed professor of physics and chemistry of the Earth's atmosphere at the Vrije Universiteit, will give a talk at IGARSS about the methane leaks that she and her team discovered using the Dutch satellite instrument Tropomi. 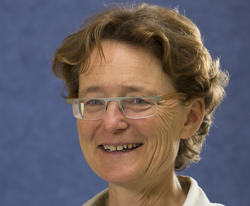 Can you give us a hint as to what your keynote speech at IGARSS 2021 will be about?

“My talk will be about a major breakthrough in my group's research. We use satellite instruments to study so-called long-lived greenhouse gases, such as carbon dioxide and methane. In recent years, we have been seeing super emitters of methane; major local sources that were previously impossible to detect from space.”

That sounds interesting. What major sources of methane are you seeing?

“Using Tropomi, we have identified various methane hotspots in Turkmenistan. We recently collaborated with researchers from the University of Valencia to take a closer look at the west coast of that country. In total, we discovered twenty-nine individual sources of methane. Twenty-five of those were flaring installations in gas or oil fields that were not functioning properly. You can easily calculate the economic and health damage caused by such a major source of methane and how much you can save by taking action and restoring the installations to proper working order. We're talking about hundreds of millions of euros per source per year.”

Why are you able to spot these sources now, whereas that used to be impossible?

“That is due to our use of new satellite instruments and a new research method. We are co-principal investigator of the Tropomi measuring instrument on board ESA's Sentinel-5P satellite. Since late 2017, this instrument has been mapping out our planet's entire atmosphere on a daily basis. It has proven itself capable of identifying major point sources of methane. In our research, we combine Tropomi's measurements with other satellite data with a much higher spatial resolution. We are basically zooming in on the source and work alongside universities, NGOs and businesses to determine the exact cause of the excessive methane emission with an accuracy of several dozens of metres.”

You will be talking about this and other topics at the IGARSS symposium. What are your expectations of the event?

“This is my first year of attending IGARSS. Besides giving my own speech, I will also be taking a good look around the rest of the conference, which will be held entirely online this year. It is good to hear about the latest developments and trends in the field of earth observation. We are constantly looking for new possibilities and smart applications for our research.”

What is the most important development in your field?

“I would say the rise of small satellites for atmospheric research. Until now, we mostly had large missions and instruments in space. By combining the measurements of large instruments such as Tropomi with data from smallsats, which are designed to examine specific gases and substances at an extremely high resolution, we can make great progress, especially towards resolving various socially relevant issues.”

What role does the Dutch space sector play in all this?

“The Netherlands is a forerunner in this field. On the one hand, we have a long history with large instruments such as Sciamachy, Omi and Tropomi. On the other hand, Dutch businesses are doing very well on the emerging market for small satellites. Earlier this year, SRON and Airbus delivered a small instrument to NASA that will be measuring aerosols. As part of a Dutch consortium that includes ISISPACE, KNMI, SRON and TNO, we are now also

Artist's view of TANGO (Image: SRON) working on the development of TANGO. This is a smallsat constellation that will specifically be looking at nitrogen dioxide, carbon dioxide and methane with a resolution of circa three hundred metres. Together with large ESA missions such as Sentinel-5 and CO2M, it makes for a very powerful combination.”

What do you hope to achieve with this new combination of large and small instruments?

“The small satellites give us much greater flexibility and allow us to react quicker than before to new developments and issues. I am highly motivated to use satellite data to contribute to the resolution of various social problems, such as major methane leaks. I am confident we will be able to close a number of those leaks, which will have major benefits for humanity and our climate.”

About IGARSS and the Netherlands