ESA’s new space probe JUICE - which stands for Jupiter Icy moons Explorer - will be tested this month at the ESTEC testing centre in Noordwijk. The Netherlands is responsible for powering JUICE with solar panels developed by Airbus in Leiden. Our country is also involved in the mission on a scientific level. Scientists and engineers from Delft University of Technology are preparing for their work on this mission together with their colleagues from JIVE in Dwingeloo. They will use radio telescopes located all over the planet, including in Westerbork in the Dutch province of Drenthe, to closely monitor the planetary explorer's progress. In this manner, they are paving the way for ground-breaking scientific research of the icy moons of Jupiter. 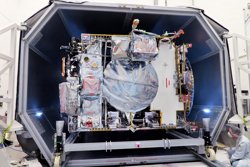 ESA's new space probe JUICE on its way to the ESTEC test center in Noordwijk. | Source: AIRBUS Bert Vermeersen, professor of planetary exploration at Delft University of Technology, is often asked what he will be studying and how. In response, he could talk about very long baseline interferometry and the correlators of JIVE in Dwingeloo. Instead, he prefers to start at the beginning and explain how an accidental discovery gives his planetary research an entirely new dimension.

In July of 2004, the American planetary explorer Cassini reaches the planet Saturn. It is carrying the European spacecraft Huygens on its back, which is scheduled to land on Titan, one of the moons of Saturn, in January of 2005. However, there is a problem with the communication between the two spacecraft. Half of the scientific observations being conducted appear to be lost. Researcher Leonid Gurvits of the Joint Institute for VLBI ERIC (JIVE) in Dwingeloo comes up with a workaround. He monitors Huygens’ landing using eighteen radio telescopes spread across the entire planet. His solution works. “What started as a technical issue ended up having a wonderful outcome,” Vermeersen explains. “Radio telescopes on Earth have provided us with data about the wind in Titan's atmosphere.” The same trick was used again later during ESA's Venus Express and Mars Express missions. Vermeersen is now working together with Gurvits, scientific leader of PRIDE, on a way to utilise this technique during the JUICE mission. This time, it is not being done to “save” scientific observations, but rather to generate even more and better scientific results with the instruments on board. 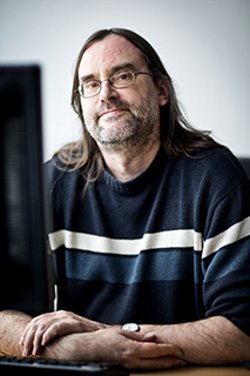 Bert Vermeersen, professor of planetary exploration at Delft University of Technology. | Source: TU Delft The Dutch experiment is called PRIDE, which is short for “Planetary Radio Interferometry and Doppler Experiment.” Telescopes that are normally used to study distant galaxies and other astronomical sources of radio waves are now being used to monitor JUICE. The correlators of JIVE play a key role in this process. These supercomputers combine data from telescopes located all over the planet into a single usable signal. “Planetary explorers usually only communicate with a single Earth-based receiver at a time,” Vermeersen says. “What we are doing now is look at the satellite using multiple telescopes that are located very far apart. In astronomical terms, this technique is known as ‘very long baseline interferometry.’ The resulting effect is similar to what happens when you look at an object with two eyes: suddenly, you can see very clearly even at a great distance. This lets you determine an object's position with far greater accuracy.” The network of radio telescopes on Earth will determine JUICE's position down to a few dozen metres - all while the craft is flying around at an average distance of nearly 800 million kilometres from Earth. “We are enriching the data generated by ten scientific instruments on board with accurate location determination. That paves the way for new discoveries.” 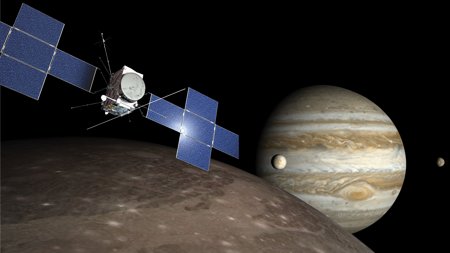 JUICE wants to determine what is under the ice of Jupiter's moons. | Source: AIRBUS An example: JUICE wants to determine what is located beneath the ice of Jupiter's moons. Is it water? Solid ground? A mantle? To find out, you must first know more about the moon's gravitational field. That gravitational field, in turn, is studied by looking at small deviations in JUICE's orbit around the moon. To do that, you have to know the exact positions of the spacecraft and the moon itself at all times. That is where PRIDE comes in. The PRIDE instrument is also used in the research of the thickness of the ice on Jupiter's moon Europa. Lastly, PRIDE allows scientists to observe how the moon Ganymede changes over time, e.g. by looking for tidal movements in its icy surface. Vermeersen: “We use PRIDE to determine exactly when JUICE passes over the same point on Ganymede's surface again. This allows us to compare measurement data from different flyovers and look for any changes that may have occurred.”

In addition to his work at Delft University of Technology, Vermeersen also spends one day a week at the Royal Netherlands Institute for Sea Research (NIOZ). NIOZ possesses a wealth of information about tidal ocean currents on Earth. “With some minor modifications, NIOZ's models and research methods can also be used on other planets and moons in our solar system. By working together, we can quickly achieve great advances in planetary science.” Leaps forward. Big questions, important answers. That is why Vermeersen has spent the last fifteen years of his life working on the scientific experiment PRIDE and why he will continue to do so for the next fifteen years as well: “In the past, we would use telescopes to look at the heavens in search of answers. Now, we can also use a different approach: we have engineers build spacecraft and send those into the void. We know for a fact that there is water on the icy moons of Jupiter and I believe we will eventually discover primitive lifeforms there as well.”

About JUICE and PRIDE

ESA's spacecraft JUICE will be launched from Kourou in French Guiana next year, after which it will spend a decade travelling through our solar system on its way to Jupiter. Upon arrival, it will begin studying the moons of Europa, Callisto and Ganymede using ten different scientific instruments and one experiment: the Dutch PRIDE. The NSO has supported the scientific applications of PRIDE for years as part of its User Support programme. NSO and the Dutch Research Council (NWO) also fund the work of Leonid Gurvits, who works as a guest professor at Delft University of Technology.