Starting this week, the Dutch satellite instrument SPEXone will be calibrated for three months in SRON's cleanroom in Utrecht. This marks the final critical step of the instrument's development and testing process. Once complete, it will study aerosols in the atmosphere from the American PACE satellite. 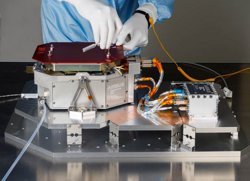 The SPEXone instrument. |Source: Airbus Defence and Space Netherlands SPEXone is a spectropolarimeter that can simultaneously detect the spectrum and the polarisation of reflected sunlight from five different angles. The resulting information about aerosols will help revolutionise our knowledge of climate change. Furthermore, it offers detailed insight into particulate matter, which has a major impact on public health.

As the head of SRON's earth observation programme, Aaldert van Amerongen is responsible for SPEXone's calibration campaign. His team is tasked with calibrating the instrument - which was developed in coordination with Airbus Defence and Space Netherlands, with support from TNO and financial support from the NSO - over the course of three months. “We will position different light sources in front of the instrument and then conduct extremely precise measurements. What can the instrument see when it is exposed to certain amounts of light of certain colours?”

It is a repetitive process, but quite exciting nonetheless, Van Amerongen says: “We are combining scientific precision with industrial routine. That calls for vast amounts of concentration and effort from a highly experienced team of specialists. After every test, we must decide as a team whether the instrument performs well enough. These are important decisions, because the next time we can conduct our measurements, the instrument will be floating in outer space, far beyond our reach.”

SPEXone has already gone through a rigorous testing process at Airbus Defense and Space Netherlands. The instrument was bombarded with electromagnetic radiation, exposed to heat and cold in a vacuum chamber and rattled around to simulate the stresses of a rocket launch. “Our work is almost done,” says Marc Oort, system engineer at Airbus. “While SRON conducts the calibration tests over the coming months, we will be preparing to ship the instrument to America. If all goes well, it will be ready to be sent off to NASA in a special crate filled with pure nitrogen by mid-March.”

Oort is proud of the new Dutch measuring instrument: “This is something we are very good at here in the Netherlands. We made the first design sketches in late 2017. Now, just three and a half years later, we have a finished instrument. What makes us so good at developing atmospheric measuring instruments? A long tradition and tons of experience. The close collaboration between the fields of industry and science is also a major factor. It is the key to our success.” 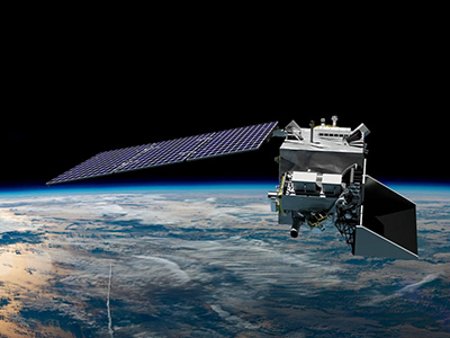 A digital representation of the PACE satellite with its instruments. | Source: NASA GSFC Oort, Van Amerongen and their teams will have to wait a while longer for the launch of the PACE satellite. It was originally scheduled for 2022. However, due to the current corona pandemic - which has hit the United States even harder than Europe - the launch has been postponed until 2023.

“Developing space instruments to study the composition of the atmosphere is a key priority of the Dutch space policy,” says NSO director Harm van de Wetering. “From an altitude of hundreds of kilometres, these measuring instruments can detect phenomena that are incredibly relevant to our society, such as the hole in the ozone layer or the increasing or decreasing presence of greenhouse gases. The Netherlands is not only home to top experts who can develop these complex instruments, but also to scientists who use the resulting data to conduct ground-breaking research. This instrument is therefore of great scientific, societal and economic importance to the Netherlands.”