Hyperscout 2 is the world's first earth observation instrument that is equipped with artificial intelligence. The Dutch satellite instrument was launched into space in September and the first images were sent back to Earth earlier this month. They were certainly promising, says Marco Beijersbergen, Director of Cosine Measurement Systems.

For those unfamiliar with Hyperscout, can you give a brief introduction?

One of those images is of the state of California. What does it show? 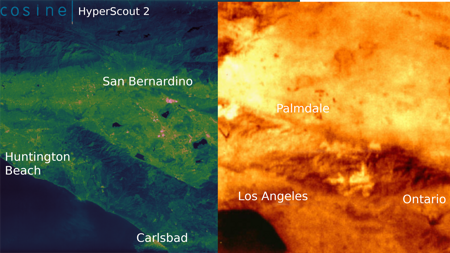 "Out of the many wavelengths that Hyperscout 2 recorded, we selected the ones with the highest contrast. This makes it possible to see things that an ordinary picture would not show. One example is the red carotene in drying leaves. This specific colour reveals which areas have an elevated risk of forest fires."

Can you also use the images to detect ongoing forest fires?

"We are still looking into that. With the help of Hyperscout 2's infrared images, we believe that is possible. This is one of the applications that is most promising for the future. Just imagine having four or five Hyperscouts in orbit around the planet. That would allow us to identify forest fires and track their spread in real-time."

What else did the initial data reveal? 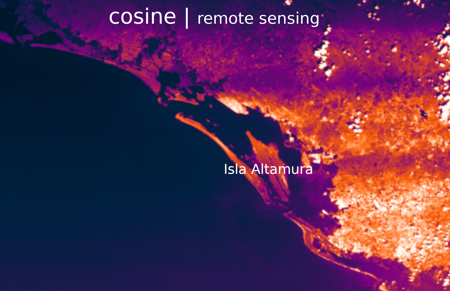 Hyperscout 2 image of the area around the island of Isla Altamura, off the coast of Mexico near the city of Culiacán. Source: Cosine "One example is an image of the west coast of Mexico, near the city of Culiacán, where three rivers run into the ocean. Like the Dutch coastline, this area is affected by tides and river water. It offers protection against the sea and harbours an enormous diversity of bird species and natural values. In this image, we can visualise oxygen and water in the atmosphere. By further processing the data, we can obtain a wealth of information about the composition of the air, the soil and the water. That will allow us to monitor the amount of vegetation, desiccation, flooding and algae growth."

Hyperscout 2 is the first earth observation instrument that utilises artificial intelligence. Why?

"With this mission, we want to demonstrate the value of artificial intelligence for earth observation. A smart computer chip is capable of handling some data processing tasks in outer space. You simply tell the instrument what you want to see, and it sends down a processed image. This technology saves a lot of bandwidth in the communication with Earth and reduces the processing time of the data."

What are some examples of what the satellite could show me?

"It can automatically detect algae, agricultural crops, ships, forest fires, areas with a high risk of forest fires, etcetera. There will be many more possibilities in the future because we can reprogram the instrument's algorithm from Earth. It is somewhat similar to an app on your phone that you update to gain access to new functionalities."

Hyperscout is an example of a Dutch success in space. What allows the Netherlands to play such a prominent role in this field?

"We were able to develop the instrument with support from ESA and the NSO in the form of contributions to the General Support Technology Programme (GSTP) and InCubed programmes for technology development. We did not only receive financial support, however. Over the past few years, the NSO put us in touch with users in the Netherlands and outside it. This boosted our visibility as a leading developer of earth observation instruments for small satellites. Together, we can demonstrate the Netherlands' excellence in this field and our desire to expand our knowledge position further."

What should we expect from Hyperscout in the future?

"There are plans for an entire fleet of small earth observation satellites with very specific applications. The rate at which you can gather specific data is interesting for commercial applications, but also for governments. Think of monitoring e.g. calamities, agriculture, oil spills and the contamination of inland waterways. Furthermore, we will combine Hyperscout data with data from the European Copernicus programme. That will allow us to complement the high-resolution images from large satellites with the frequently updated images from smaller satellites. Together, we will be able to provide a much greater number of end users with the earth observation data that are most valuable to them."