The Dutch satellite instrument Tropomi is capable of detecting the nitrogen dioxide emissions of individual ships from space. That is the result of a joint publication of the Royal Dutch Meteorological Institute (KNMI), the Human Environment and Transport Inspectorate (ILT) and Wageningen University & Research. The observations mark a first for the field of earth observation: never before was a satellite capable of detecting the emissions of ships with this degree of accuracy. The research shows that the Dutch space technology can play an important role in the future in the monitoring and enforcement of stricter emission standards for the shipping industry.

Tropomi is the only measurement instrument on board the European Sentinel-5P satellite. Every day, the instrument maps out the composition of the Earth's atmosphere on a global scale. The researchers were examining measurement data from 2 July 2018 regarding a busy shipping lane in the Mediterranean Sea. As a result of the optimal weather conditions that day and the interface with other data sources, plumes of nitrogen dioxide in Tropomi's data could be traced back to individual ships at sea.

"The weather that day was stable and clear," says Jos de Laat, Senior Researcher at the KNMI. "The sun reflected off the Mediterranean, which results in high-quality measurement data with little interference. We combined Tropomi's data with data on wind speed and direction and the location data of 185 ships that were present in the study area that day. This allowed us to determine the nitrogen dioxide emissions of the largest ships, including oil tankers and con 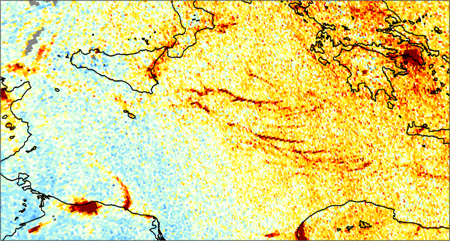 The study focusses on the busy shipping lane between the Suez Canal and the southern tip of Gibraltar. Since Tropomi has global coverage, the same method can be used at other locations around the world, De Laat says: "In the future, we can use instruments like Tropomi to efficiently and accurately monitor the emission levels of ships on a global scale."

Per 1 January 2020, the maximum sulphur content in marine fuel has been lowered from 3.5 per cent to 0.5 per cent. On the North Sea, the limit is just 0.1 per cent. Newly constructed ships are also subject to increasingly strict nitrogen emission requirements. In the Netherlands, enforcing these rules is the responsibility of the ILT. Jasper van Vliet, Chief Data Scientist at the inspectorate: "We have always faced the challenge of having to monitor and enforce a growing number of rules with a limited number of people. With the help of remote sensing technology like Tropomi, we can do a better job."

Over the coming years, the ILT and the universities of Wageningen and Leiden will work together to develop a method for monitoring the emission levels of ships with the help of satellite data: AVES-oculuS (Algorithms for the Verification of Emissions from Shipping with Satellites). Van Vliet: "Our ambition is to use satellite data to determine whether ships are following the rules. As an inspectorate, we will know which of the tens of thousands of ships that visit Dutch waters and ports every year we need to inspect."

About the study and Tropomi 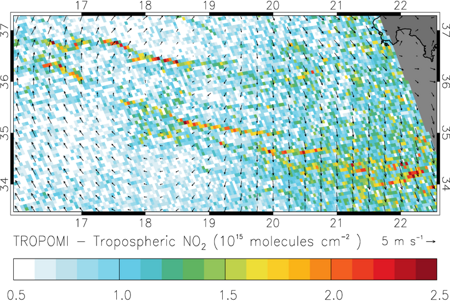 NO2 patronen zijn duidelijk zichtbaar. Bron: Tropomi data van 2 juli 2018, KNMI. The aforementioned research was conducted as part of the FAST project (First Assessment of Shipping emissions in Tropomi) and funded by the Handling Data Differently programme of the Dutch Ministry of Infrastructure and Water Management and the ILT. FAST was a preliminary study conducted in support of the AVES-oculuS project.