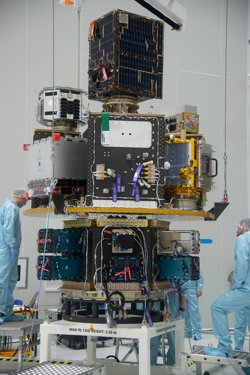 Satellites being integrated onto the SSMS payload dispenser. Source: ESA On Friday 19 June, more than forty small satellites will be launched into space at the same time from French Guiana, with the Vega Small Spacecraft Mission Service (SSMS). This marks the first time that a rocket launch by the European aerospace organisation ESA is dedicated entirely to small satellites. The rocket will contain myriad Dutch innovations and hardware, which will create new commercial opportunities in the field of smart small satellite technology.

Delft-based CubeSat specialist ISIS is involved in the launch in several ways. The company handles the complete launch for a number of clients, developed hardware for Vega with which to deliver various satellites into the right orbit and also constructed three of the forty-one satellites: Simba, designed to monitor the earth's heat balance; Dido-3, which will be used to study the E. coli bacteria in zero gravity and a CubeSat for the Royal Thai air force.

“This is the first European rocket launch to be dedicated entirely to small satellites,” says Jeroen Rotteveel, ISIS’ director and founder. “I hope to see more of these launches in the future, which will make it more affordable to send small satellites into space.”

Jeroen Glazener of the NSO certainly believes that will happen: “The Dutch government has always stimulated the development of small satellites and a smaller rocket like Vega. The demand for small satellites is growing, which creates new commercial opportunities for the Dutch aerospace sector. This Vega launch shows that new possibilities are opening up for this market.” 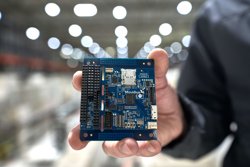 One of the satellites on board the rocket was built with the help of two Dutch companies: LensR&D and Capable. Respectively, they developed sun sensors and the wiring for ESAIL, a satellite that tracks ships at sea via the AIS signal. If a ship is in trouble, this signal ensures its distress call is not overlooked.

Cosine is also looking forward to the launch of Vega. This Dutch company developed Hyperscout-2, a smart instrument that can spot forest fires, floods, droughts, etcetera from space. In the small ESA satellite Phi-Sat, the instrument will utilise artificial intelligence for the first time.

Cosine's Marco Esposito: “We are experimenting with cloud detection. Our instrument calculates where clouds obstruct an image and then only sends the usable, cloud-free images to researchers back on earth. That saves a ton of time and money when the data are processed.”

The Dutch aerospace sector not only contributed to the satellites of SSMS. The Vega rocket that will launch the satellites into space also contains Dutch components. Airbus Defence and Space Netherlands from Leiden built the interstage that connects the first and second rocket stages of the thirty-metre-long rocket. The Brabant-based company Aerospace Propulsion Products (APP) built igniters for Vega's three solid-fuel engines.