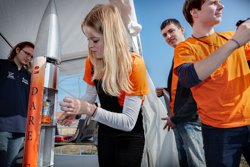 Photo: DigiDaan Ten, nine, eight... Tension was building at Artillerie Schiet Kamp ’t Harde in The Netherlands. Seven, six... Students had spent months in preparation of today, working nights and weekends at their high school. Five, four... Would the launch of their CanSat to an altitude of one kilometre be successful? Three, two, one...

Over fifty high school students experienced the apotheosis of the Dutch CanSat competition on Friday March 29. For months they’d worked in teams to develop and build a satellite out of a soda can. Hence the term ‘CanSat’. They wrote proposals, built the hardware and tested it to declare it fit for launch. And then came those gruelling ten seconds of launch day. 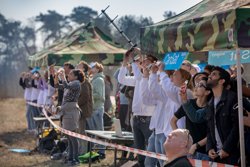 Photo: DigiDaan Accompanied by people of NEMO Science Museum, the Netherlands Space Office (NSO), amateur rocketry team DARE from Delft and military personnel, the students launched two rockets. The first shot to one kilometre in just a couple of seconds and detached five small satellites, while five teams were cheering from the ground.

One of these teams was N.A.G. from the city of Groningen. Their mission: detecting space debris by emitting and receiving radio waves. Team member Cécile de Jong explains: ‘Of course we know there is no space debris at one kilometre altitude in the atmosphere. But our CanSat did pick up a signal, probably of one of the other CanSats. So the system we built worked.’

De Jong enjoyed launch day as much as the months leading up to it. ‘We’ve spent a lot of time developing this satellite. On some days, we worked until nine o’ clock in the evening at school. But it was a lot of fun and I am proud of what we’ve accomplished. For me personally it has brought a lot too. Before I started this project, I wouldn’t have considered a technical or scientific education. Now I wouldn’t want anything else! Aerospace engineering at the Delft University of Technology is an option. Or physics or astronomy.’ 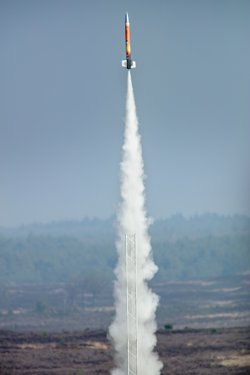 Photo: DigiDaan Mike Roelofs of the team Space-IT! from Almere couldn’t have had a worse launch day. His teams satellite exploded along with the second rocket, only to fall back to Earth as scrap metal. As with real space endeavours, Roelofs knows, things can go wrong. ‘We couldn’t have done anything differently. What we can do is rebuild our CanSat and launch it during a parachute jump from a small air plane. We will do anything to get data.’

The Dutch CanSat competition is an ESERO-project, executed by NEMO Science Museum commissioned by the Netherlands Space Office and financed by the Dutch Ministry of Education, Culture and Science. Its purpose is to inspire high school students to continue their studies with a technical or scientific major. For more information on the European CanSat competition, please visit: https://www.esa.int/Education/CanSat.