Satellite with Tropomi in orbit around Earth and working superbly

After a flawless launch last Friday, Sentinel-5P with the Dutch space instrument Tropomi on board has now circled the Earth over 50 times. The satellite is working superbly. ‘There were no surprises, and we are even slightly ahead of the schedule for the first three days’, ESA stated.

After everybody at ESTEC who had followed the launch last Friday with bated breath had seen the rocket rise with thundering noise, a cautious initial applause was given. Exactly 93 minutes later, a resounding and relieved cheer was heard when the first signal from the satellite appeared on the large screen in the form of a peak in a graph.

‘This is the start of a new era’, said NSO director Ger Nieuwpoort. ‘I am extremely proud of the Dutch contribution to this project and am pleased for everybody who has worked on this project with such considerable dedication and enthusiasm. My congratulations to ESA, the European Commission and the team behind Tropomi.’

The signal on the screen demonstrated that several crucial steps after the launch had been successfully completed. For example, the satellite had to separate from the last stage of the rocket at a speed of 27,000 kilometres per hour. Next, the three solar panels had to unfold and the communication with the ground station had to start up. If something had gone wrong with those steps, then that could have meant a premature end of the mission.

Now that the satellite is working well, the following phase can begin: the preparation and tuning of the Tropomi instrument. That will take several weeks. ‘First of all, the instrument will be heated up to combust any gasses that have been taken along from Earth’, said Harry Förster, project manager at NSO. ‘After that, the radiator will unfold, the instrument will cool down and we’ll be able to use the sensors.’ 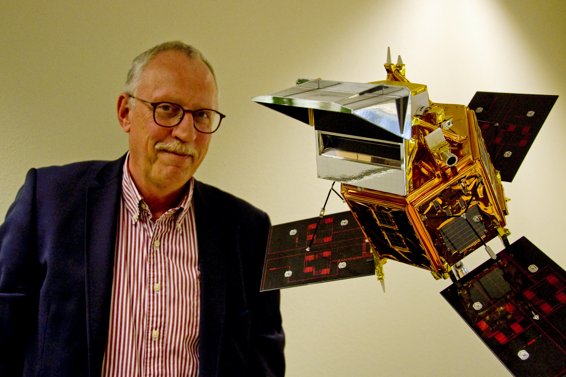 And then it will be a matter of waiting for the first light, the first image based on Tropomi data. That is expected to be delivered at the end of November. Over the past few years, the KNMI had time to properly prepare for receiving and processing the enormous quantity of data that Tropomi will soon transmit to Earth. That data will arrive at the KNMI in De Bilt via Germany. Principal researcher of Tropomi, Pepijn Veefkind: ‘We already have a total of 10 data products ready for use. Once we combine the new data with other datasets, countless other applications of Tropomi data will undoubtedly arise, both here and elsewhere. The possibilities are endless.’