The Sentinel-5P satellite, with the Dutch space instrument Tropomi at its core, is ready for launch. After its launch, Tropomi will monitor the air quality and spread of greenhouse gases with unprecedented precision. In early October, a Russian Rokot-type rocket will place the satellite into orbit from the Plesetsk Cosmodrome in Siberia. The Sentinel-5P was seen for the last time today in the cleanroom of Airbus UK in Stevenage, before being prepared for transport to the launch pad. 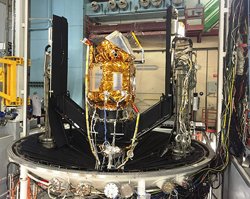 The aim of the European megaproject Copernicus is to deploy satellites to monitor the safety and health of our planet. Working on instructions from the European Commission, the European Space Agency (ESA) has already launched five Sentinel satellites into space, all of which are observing the Earth through their own electronic eyes. Sentinel-5P is the latest addition to the Copernicus stable, this time packed with Dutch-made high tech, combined to form the technological tour de force, Tropomi. Its mission: to analyse the Earth’s atmosphere, every day, across the globe, with unprecedented precision.

And not before time, says Pepijn Veefkind from the Royal Netherlands Meteorological Institute (KNMI), which manages the scientific side of the project together with the Netherlands Institute for Space Research (SRON). ‘Previous satellite readings provided data about the air quality above urbanised areas around the world, such as Western Europe and Eastern China. The red patches on the maps we compiled from this data speak for themselves. The high-accuracy observations made by Tropomi will give us pointers for tackling the problem.’

Pointers are sorely needed to come to grips with the climate problem. Tropomi is expected to make an important contribution in this respect, by literally mapping the routes taken by greenhouse gases through the Earth’s atmosphere. Veefkind: ‘A gas like methane, for example, might be much less prevalent in the atmosphere than carbon dioxide, yet it has a much more powerful greenhouse effect. Tropomi will show where it’s coming from and where it’s going.’

Several technological developments realised by the aerospace company Airbus in Leiden, and incorporated into the global concept, are crucial to Tropomi. Sytze Kampen from Airbus: ‘Our partners SRON and TNO came up with the idea of immersed gratings. It’s a clever optical trick that allows the whole instrument to be forty times smaller. Pure profit in space engineering terms.’ 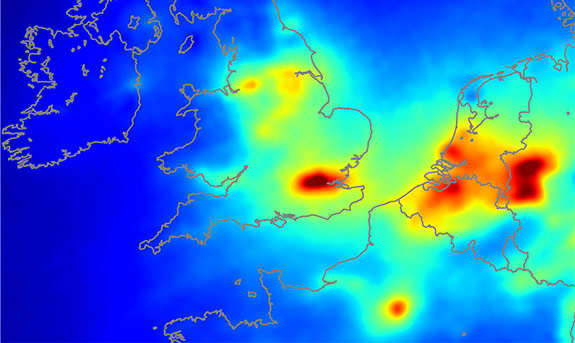 The Dutch government has invested a total of € 80 million in the development of the space project, thanks to an agreement signed with ESA in 2009 by former Minister of Economic Affairs, Maria van der Hoeven. This allowed the Netherlands Space Office (NSO) to award the contract to the consortium that developed Tropomi. This will lead to more than just new scientific insights, says deputy-director of NSO, Nico van Putten: ‘We are capitalising in a field where the Netherlands is already a world leader. Tropomi is creating opportunities for new international projects for Dutch space technology.’

The advanced technology used for Tropomi is the life’s work of many Dutch engineers, which is why a final glimpse of the satellite is so special, says Sytze Kampen from Airbus in Leiden. ‘This is the final result of a combination of Dutch high tech and years of dedication from a close team of specialists. Seeing a project actually ready for launch is a rare occurrence in the career of a space engineer.’

This is how Tropomi works