Dutch radio antenna to depart for the moon on Chinese mission

Researchers at Radboud University, ASTRON and the Delft company Innovative Solutions in Space (ISIS) are to develop a new instrument that will be onboard the Chinese Chang’e4 satellite that will be placed in the Lagrange point L2 of the Earth-Moon system in 2018. 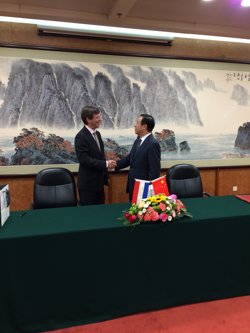 NSO Director Ger Nieuwpoort and CNSA administrator Xu Dazhe signed the agreement in Beijing on 28 June 2016.Today, in Beijing, The Netherlands Space Office (NSO) and the Chinese national space agency CNSA signed a partnership agreement on a mission to the moon, made possible by the organisations’ Memorandum of Understanding (MoU) in 2015. The agreement was prepared with support from the department for Innovation, Technology and Science of the Netherlands Embassy. The radio antenna is the first Dutch-made scientific instrument to be sent on a Chinese space mission, and it will open up a new chapter in radio astronomy. “This instrument will help us find answers to vital questions concerning the origin of the universe,” said Gert Kruithof from ASTRON, “and this project will represent a new milestone in astronomy.”

Long-term partnership
Radboud University astronomers Heino Falcke and Marc Klein Wolt are the scientific advisors for the project and have spent years working towards taking this important step. “The instrument we are developing will be a precursor to a future radio telescope in space.” said Klein Wolt, director of the Radboud Radio Lab. “We will ultimately need such a facility to map the early universe and to provide information on the development of the earliest structures in it, like stars and galaxies.” 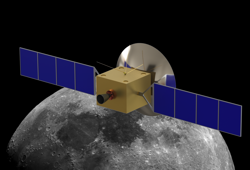 Chang'e4 satelliteAlbert-Jan Boonstra, programme manager at ASTRON, explained: “Our years of experience in the construction of the Westerbork radio observatory, the Low Frequency Array LOFAR and the development of the Square Kilometre Array will be put to use in the construction of this new instrument.” Experts in innovative satellite systems engineering from ISIS will be responsible for the system integration of the instrument, and its accommodation on the Chang’e4 satellite.

Measuring radio emission in the virtually unexplored frequency regime
Why is it so important for the measuring instruments to be placed behind the moon? Heino Falcke explained: “Radio astronomers study the universe using radio waves, light coming from stars and planets, for example, which is not visible with the naked eye. We can receive almost all celestial radio wave frequencies here on Earth. We cannot detect radio waves below 30 MHz, however, as these are blocked by our atmosphere. It is these frequencies in particular that contain information about the early universe, which is why we want to measure them.”

As so little is known about this part of the electromagnetic spectrum, the measurements made by the Dutch radio antenna on the Chinese satellite could be the first to provide information on the development of the earliest structures in the universe. This information could help confirm the Big Bang theory. As these radio waves are so weak, the satellite needs to be placed behind the moon, where there is relatively little disturbance by radiation from sources on Earth. 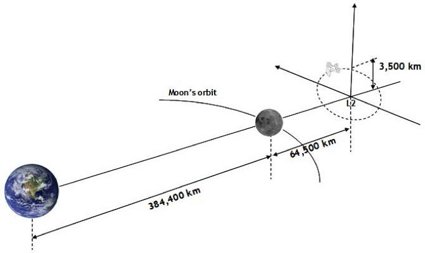 Figure 1. The satellite rotates around a fixed point behind the moon – the second Lagrange, or L2, point in the Earth-moon system. This point is located 65 000 kilometres from the moon. (Image source: Georgia Tech)

Solar storms and radio pulses from planets
Another task of the antenna is to monitor the ‘weather’ in space. Powerful events such as solar storms can affect telecommunications here on earth. Klein Wolt: “More knowledge on the impact of such eruptions on the surroundings will help us to better predict such events. We also want to measure strong radio pulses from planets like Jupiter and Saturn to obtain new information about their rotational speed.” Finally, the team wants to produce the first reasonably accurate map of the sky at these low frequencies, which should be possible after a few complete rotations of the satellite and moon around the earth. Klein Wolt is already looking ahead: “We hope signals from the early universe will slowly emerge after a year or two of measurements and data analysis.”