It’s high fives all round at Artillerie Schiet Kamp (ASK), a military firing range in ‘t Harde, moments after a rocket built by Delft Aerospace Rocket Engineering (DARE) of Delft University of Technology has released six ‘CanSats’ at an altitude of 1 kilometre. A second rocket carrying another four of these mini satellites follows soon after. The high fives and CanSats are all by the participants in the CanSat competition. These senior secondary school pupils are hoping to be among the next crop of space scientists and space technicians. 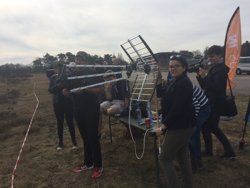 In the early morning of 31 March, there are no high fives yet on the firing range, just fevered consultation and last-minute testing and adjusting of the CanSats. Since November, ten teams of pupils have been working to perfect their own CanSat: a small satellite the size of a soft drink can. As part of the CanSat competition – which is back after a few years’ break – the mini satellites take to the air by rocket and then parachute back down to earth.

Mission
But the real mission is to collect data on temperature and air pressure. This means that gazes are focused not only on the CanSats, but also on the laptops that will be showing the data in real-time. Each team also has a secondary, self-designed mission. These ten teams had already presented their designs and missions and come out on top in a contest between a total of 25 school teams. The competition is organised by NEMO-based ESERO NL, working on behalf of NSO in partnership with DARE and the Dutch Ministry of Defence. 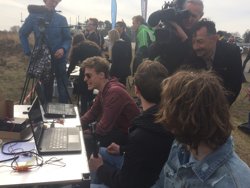 ‘Our secondary mission is to collect camera images from our CanSat, and to unfold the landing mechanism,’ says Paul (17), a pupil at the Bataafs Lyceum in Hengelo. His interests currently lie in physics and astronomy: a good reason to be able to handle data collection and analysis. A little further on, Gopal (16) says he is especially interested in aerospace. Alternating between fluent Dutch and English, he gives a detailed explanation of the secondary mission of his team from the Amsterdam International Community School team: calculating wind speed using GPS data.

Spectacular
‘The secondary missions are truly spectacular,’ says Sander Jansen of ESERO NL. ‘Measuring UV intensity or gas levels in the air is really clever stuff. These pupils are the scientists of tomorrow.’

Tension
At around T minus 30, the first six CanSats disappear into the DARE rocket and the tension starts to rise. The arrival of a real-life television crew causes it to rise even further. Nevertheless, the teams say they are already receiving data from a satellite still in the rocket. The antennas they are using are self-made.

Launch
At T minus zero, the rocket takes off, followed by a second launch just moments later. At the highest point, the CanSats are released, while tables and graphs begin to appear on laptops on the ground. The data come streaming in for almost every team and a squad of military personnel stand ready to retrieve the mini satellites from the field. Each CanSat emits its own characteristic sound or identifying signal. 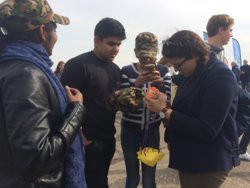 Winner
The teams are itching to get back to school to analyse their data and write it up in a report. An expert jury will decide which team can call itself the Dutch winner of the CanSat competition on 21 April, and go on to uphold the Netherlands’ honour at the European competition in Bremen, Germany, from 28 June to 2 July. That means another launch and another round of tension of the CanSat competition.